Over a year ago my in-laws were gracious enough to get me a nice gift certificate to Cabela’s for Christmas.  So I decided to use it towards the purchase of an RCBS rock chucker supreme master reloading kit.   Sounds impressive, I know.

Anyway, I bought the kit…and some additional reloading items, brought it home and it sat in my closet for about a year.  Such is life.  Then, about 4 months ago, I decided to start taking my gun shooting seriously and in order to do that I would need to start reloading.  So, I dusted off the gear….bought a workbench for the garage to mount the press on, and dove headfirst into the Lyman Reloading Handbook.

As a computer programmer by trade, I take pride in being able to solve problems.  And so at first, reading the manual felt like I was reading a completely different language.  Greek would be easy compared to this:  primer pockets, chamfer tools, carbide die sets, OAL’s, powder charges, and flash holes were just the beginning.  The basics seemed simple, but once you get into caliber specific information, a man could literally spend weeks lost in the veritable maze of permutations of casings, powders, bullets and primer options…..and that’s just for a single caliber!

After a couple of days on and off of reading the steps over and over, I realized I honestly still had no clue how to put it all together in practice to make actual ammunition.  So I did what any self respecting man would do in the modern age: I went and found a video of another dude on Youtube fumbling his way through reloading too!!  Actually…I found a really good 4 part intro that really cleared up a lot of confusion.    And so on a cold winter day I ran my first 50 handloads of 9mm through my trusty RCBS single stage press. 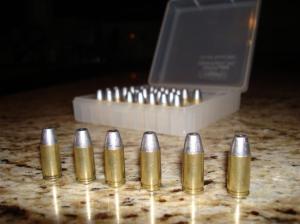 When they came out (believe me, it took a while) I actually took pictures of them (right).  They were like little mini-children that I’d somehow spawned from a mixture of determination, ingenuity, sorta-know-how and a good dose of “I hope I don’t blow myself up” thrown in for good….er….measure.

So the mini-children sat in my gun safe for about a week.  I stared at them daily hoping the next weekend would be nice enough to head to The Playground and see if I came back with all limbs intact.

I think it’s fair to say as a point of note here that while there certainly may be people out there who have reloaded ammunition for the first time who did NOT in any way, shape or form feel the need to take out a second life insurance policy prior to “testing” their first loads.  If so, they have a set that clanks and I applaud their talents at not care much about life nor limb….or perhaps being too stupid to know otherwise.  Be that as it may, I was NOT one of those people.  To be quite honest, I let them sit in the safe longer than I really had to, but just wasn’t sure I had the guts to actually detonate them with anything less than body armor on.  And unfortunately, body armor is not cheap.

Anyway, back to the story.  So I take them out The Playground within a few weeks, along with several other guns and a full can of ammo intending to do bodily harm to some steel targets.   Poor targets.  And I figure I might as well just go ahead and find out if I read the instructions  (or as my Dad would say…the “destructions”) correctly, followed the videos and overall did a good job of making my first batch of explosive devices (yes Mr. NSA…I said explosive devices).

Anyway….I’ll save you the suspense.   Having to learn to type with one hand is a lot harder than I thought it would be.   OK, seriously….I fired all 50 reloads on target at 25 feet.  Sure, I had a big target…but you’re missing the point.  They worked!!  At that moment as I bent down to pick up my 50 cases of spent brass….thinking the whole while about cranking up the charge by another half a grain, getting something other than RNFP’s, or maybe trying some winchester primers on the next load…….I suddenly realized how all these people get addicted to reloading.